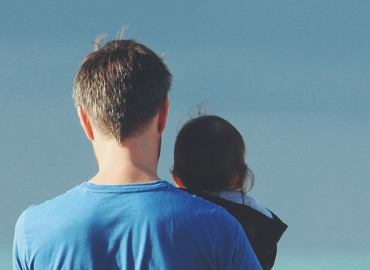 How does CompassCare get the father of the baby involved?

It is a very good question and one that is asked frequently. I think what is actually meant by the question is, ‘How can we get the father of the baby to act like a man?’ The act of ‘fathering’ means he is already involved. But is it possible to raise his involvement beyond the merely biological to the moral?

There are at least three major factors at play for a father to increase his ‘manliness’ in a positive moral sense toward his child and the woman he impregnated. First, the mother of the baby must want the father involved. Many women are at risk for abortion precisely because they don’t want his baby. Second, the father himself must want to be personally involved. And third, the culture and the baby’s mother must permit him to take up his proper role as husband and father.

Presupposed in all this is a Biblical definition of manhood which the father of the baby AND the mother likely were not taught or have rejected in favor of unadulterated individualism. The context for most unplanned pregnancies can be described as a cold relational ‘equality’ where two consenting adults treated each other as mere objects of pleasure, disdaining the outcome so fraught with lifelong responsibility. So while she might feel alone in this unplanned pregnancy, alone is all she ever has been.

In order to answer the original question above we must understand manhood. The biblical definition of manhood is presumed when the Apostle Paul commands the Corinthians to “…act like men” (I Corinthians 16:13). Verse 13 includes elements like being alert, being strong, and standing firm in the faith. The notion to ‘stand firm in the faith’ supposes that a man knows what he believes and acts on it, thinking of others before himself.

Paul’s further instruction in his Ephesian letter labels married men as ‘husbands,’ a title which surprisingly remains unsullied by the feminism driving the abortion business. A husband is a steward. In the relationship of marriage, God’s family structure requires a man to husband his wife, according to Jesus’ standard of husbanding the Church (Ephesians 5:21-33). In exchange for Jesus’ total sacrifice to buy His people back from sin and death He requires submission. So too the husband/wife relationship is designed as a fuller picture of the Christ/Church relationship.

A good gardener husbands a garden by pulling the weeds, watering, enriching the soil, and erecting a fence to protect the fruit it produces. Likewise, a husband is supposed to use all his resources to create and sustain an environment where his wife and children can grow into the fullness of their destiny under God. When a man withholds from his wife this kind of leadership it creates the circumstances for her and the children to morally wither, leaving them to fend for themselves spiritually, emotionally, and often physically.

Will our culture allow a biological male who sires a child to be a true man, a Biblical husband and father? Will he see and happily shoulder that burden with all he has? Will she willingly submit to him, giving up her false and family-destroying definitions of feminized equality and careerism?

CompassCare attempts to involve the father by encouraging the mother to invite him to her appointment, by having him see the ultrasound scan, etc. But the buzz saw of individualism, manifesting itself in feminism’s elimination of traditional gender roles, has made its way to the tap root of the tree of civilization, shredding family to bits. The Church alone is designed to offer healing to the culture through Jesus if only it can resist the cultural pressure to cave. It is only in submission to Him that fathers and mothers are empowered to live according to His created order and truly thrive. Only a church that measures itself by the standard of scripture, submitted to Jesus Christ, is given the power of the Holy Spirit to love sin-sick souls back to health. A father’s chances at husbanding a healthy family are bound together with the Church’s submission to Christ over culture….