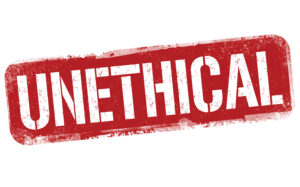 Pro-abortion politicians seem to be partnering with the mainstream media in order to silence pro-life organizations before the truth about the abortion industry’s consumer fraud can get out. Women deserve to be given the information needed to make a truly informed decision. By hiding important health risks and silencing pro-life pregnancy centers, pro-abortion politicians and the abortion empire coerce women into getting abortions in order to further their own agendas and increase profits.

In a post-Roe America, the abortion empire is continuing to deny women informed consent. In a similar way to how big tobacco obfuscated health and safety data, the abortion industry has been hiding important health and efficacy data from women. The chemical abortion businesses claim that “The Abortion Pill is Safer than Tylenol,” yet a study of women in Finland reports chemical abortion is 400% more dangerous than surgical abortion. Other side effects include undiagnosed ectopic pregnancies and potential for permanent infertility if the woman is not diagnosed as Rh negative. Women have a right to know the risks of having an abortion and all of their alternatives. The principle of informed consent is required for a woman to be truly autonomous. Yet, ironically, it is systematically disregarded by the abortion empire.

Pro-abortion politicians such as NY Attorney General, Letitia James, and mainstream media sources such as The New York Times, in a seemingly coordinated effort, are advocating that Google restrict the ability of pro-life pregnancy centers to market their services to women experiencing an unplanned pregnancy. This would not only deprive pro-life centers of their right to free speech, but also deprive women of the ethical medical care and comprehensive community support these centers provide. CompassCare CEO, Jim Harden, states, “It appears that pro-abortion politicians don’t think women are smart enough to navigate Google and the abortion education that comes up in a search. Pregnancy centers provide information not only about a woman’s specific condition, but also how abortion will impact that condition. That’s what we call in the medical community ‘informed consent.’”

Pro-abortion politicians seem to be partnering with the mainstream media and the pro-abortion terrorist group known as Jane’s Revenge in order to silence pro-life organizations before the truth about the abortion industry’s consumer fraud can get out.

Help CompassCare expand to reach and serve even more women seriously considering abortion in NY and across the United States.