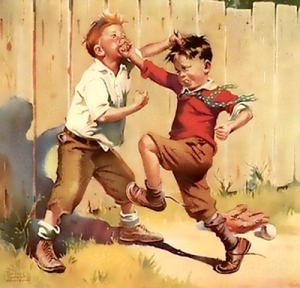 Remember when you were a kid and you’d get in heated debates about which superhero was stronger, or whose bicycle was faster? You might have begun with objective sounding statements of pseudo-fact that demonstrate why the considerable innate powers of Superman are superior to the brainy and well-funded technology of Batman. Meanwhile your friend would retort with increasingly shrill tones, insisting he would gladly take brains over brawn any day. To which you might respond, “Yeah but what good are brains if they are incinerated by the piercing heat of laser vision?!” And so on until your friend’s mom calls you up from the basement for lunch. All is forgotten in the bliss of potato chips and PB&J until you are kicked outside to enjoy the sunshine and then proceed to debate the speed capabilities of your dirt bikes. These debates may feel very important to boys but are not meaningful because they center on unprovable matters of personal opinion.

Sadly, those heated yet unsolvable childhood arguments now dominate western culture, and instead of harmless notions of superheroes and dirt bikes, the problems are real and the stakes are high. These debates include everything from education to euthanasia, from healthcare to homosexuality, and from assisted suicide to abortion. The reason that these debates degrade into increasingly shrill tones and remain unresolved, is because, at heart, each side believes the same thing-that morality can be rooted in personal choice, nothing more. “I chose this set of beliefs over others and therefore, mine are superior.”

Some choose their philosophy based on sheer innate desire, not unlike Superman, and try to cram it down culture’s proverbial throat via legislation and judicial activism. Others react to the wrongheaded policy-making based on careful study of sociology, history, and ways of man, like the studious style of Batman, unafraid to confront the bad guys in our cultural darkness. These two warring philosophies have names. Superman represents Nietzsche and Batman represents Aristotle. Both of them are wrong. Aristotle is less wrong but still comes up short in his ability to solve today’s dire social straits.

As an example of how this plays out, let’s examine abortion. It is too often viewed as a matter of personal opinion expressed with oversimplified labels like pro-choice (Superman aka Nietzsche) vs. pro-life (Batman aka Aristotle). Nietzsche says that when society rejects God there can be no meaning to human life beyond what a man ascribes to it. Therefore, he who has the will to assume power can dictate his fabricated morality upon others. Aristotle on the other hand assumes man is basically good and his purpose is to contemplate the good, which can only be attained by living a life of virtue in a community with other virtuous citizens. Society has a responsibility then to sustain a virtuous environment by rewarding good behavior and penalizing bad. The subjective, personally chosen worldviews of Nietzsche and Aristotle are at war and the battlefield is America. At risk of oversimplifying, I would say Superman (Nietzsche) is winning.

While it might look like western social dialogue is in a heady debate, it is really a battle of wills, a manifestation of what Nietzsche describes as a sheer “will to power,” best characterized with the childish exchange, “I’m right!” “No, I’m right!” When philosophy is the foundation for moral behavior, definitions of right and wrong come down to personal preference, prolife/prochoice included. It presumes that each person is their own final moral authority, capable of creating reality and forcing it upon their perceived weaker or dumber neighbor.

Moral behavior must be centered on something above human philosophy, the eternal nature of God Himself. Only then we can aspire to a common truth, that all humans without qualification are equally valuable because God’s imprint is upon us all equally from fertilization to natural death. To assume mastership over the life or death of another human via abortion ignores the glory of God in us all. Our moral obligation as beings created to reflect God’s glory is to submit to the objective reality that we ought to treat each other the way He treats us, with dignity and love.

Rejecting philosophically driven morality by submitting to the Word of God is the only path to an eternal moral framework that has the power to transform our selfishness and pride into sacrificial love for my neighbor (see worldview war graph below). If our society returns to a belief that man is created by God to reflect Him, then it becomes difficult for moral behavior to be dictated by the shortsightedness of a few folks sporting suits or black robes. The Lord Jesus says in Matthew 24:35, “Heaven and earth will pass away, but My words will not pass away.”