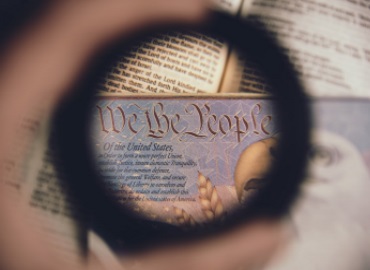 The 2019 New York legislature is promising to be the most pro-abortion in U.S. history. They plan to pit the fabricated right of abortion (see Reproductive Health Act) against the foundational human right of religion, practiced by pro-life people who want to help women have their babies (see Pregnancy Center Investigation Bill). When government usurps the role of “Rights Creator,” all fabricated rights compete with the inherent rights common to humanity. If those in government continue this right-making hoopla, the friction will increase the already fevered cultural temperature, fraying the fabric of society until the tapestry of true liberty based on inherent human dignity bursts into flames. To accept a government’s decree of a new right reveals, not a relationship of equal citizenship, but that of a master to a slave. This demeans and dehumanizes not only the beneficiary of the fake right but further disfigures the face of freedom for all.

Because of this recent turn of events, God has put pro-lifers in the enviable position to have to rely on our faith in Him. When the lawyer asked Jesus how to “inherit eternal life” in Luke 10:25 it came down to two things: Loving God and loving our neighbor. “But wishing to justify himself, he [the lawyer] said to Jesus, ‘And who is my neighbor’” (Luke 10: 29). So Jesus tells him the story of the Good Samaritan who, unlike the powerful and popular passing by on the other side, sacrifices his time and treasure on behalf of the vulnerable. Then Jesus turns the lawyer’s question back on him, “Who proved to be a neighbor to the man who fell…?” What He teaches us is that the opposite of love is not hate, but partiality – choosing which vulnerable humans qualify as recipients of our favor. Yet all people are equally valuable and deserving of protection. The lawyer’s question, “Who is my neighbor?” implies a man-made hierarchy of human value. This is favoritism and it is wrong. Any act or ruling that places one person or set of people below others, like preborn babies, is a fundamental rejection of the intrinsic dignity of each person. To see this partiality manifest itself in State government under the false pretense of equality and tolerance is cause for great alarm.

Christians know that each of us is the man beaten and left for dead on the Jericho road of life and that Jesus is our Good Samaritan, exchanging His righteousness for our sin on the cross. To choose who qualifies as our neighbor when God has caused our path to intersect with the vulnerable is a denial of what Jesus has done for us. This is why pro-lifers in New York remain faithful to God, regardless of government and public opinion, affirming the humanity of the oppressed which is denied by the powerful. If we stay true to the first principles of loving God and loving our neighbor, without partiality, as Jesus taught in the parable of the Good Samaritan, then we, though few, will continue an unstoppable force, a faithful witness of God’s Gospel. For if we stare unflinchingly at the heavenly truth, we will watch God show up either in the miraculous courage of His faithful ones facing the fire or in His supernatural intervention to quench that fire.

God in His mercy is giving believers a choice: Either we can continue to love our preborn neighbor, even when the political winds blow foul, or cave to culture. The good Lord is giving us a great gift…an opportunity to exercise the faith He has given us through the riches of the cross of Christ. And should the political tide continue contrary to true justice, God may turn those tumultuous waters into a path upon which His people walk, the waves of progressive propaganda unwittingly raising God’s faithful to a platform where all can see human dignity and what it means to be truly free.