Abortion and the 14th Amendment

The fourteenth amendment to the U.S. Constitution states in part, “…[no] State may deprive any person of life…without due process of law; nor deny to any person…the equal protection of the laws.” 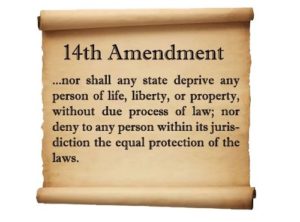 include the preborn child.

To do this SCOTUS ignored the fact that the fourteenth amendment was drafted and ratified by people and States that DID include preborn children in the definition of “person.” The Harvard Journal of Law and Public Policy (Vol 40, No. 2) states, “By the time of the Fourteenth Amendment’s adoption, nearly every State had criminal legislation proscribing abortion and most of these were classified among ‘offenses against the person.’”

If you would like to sponsor Real Abortion News by CompassCare go to realabortionnews.com/donate