The Morality of Abortion

Was legalizing abortion as the 1973 U.S. Supreme Court ruled morally correct? If it should be legal, to what extent should it be restricted by the States if at all as some like Texas have insisted? Should all medical providers be forced to participate in abortion by referring or providing it as the politicians in CA, WA, IL and NY insist? Should the Federal government use half a billion in tax dollars to fund the world’s largest abortionist, Planned Parenthood, as congress is now debating in Obamacare repeal/replace efforts? Should NY, the nation’s abortion capital, fund 46% of all its abortions through Medicaid as recently released vital stats demonstrate? Is it the Federal government’s place as in Obamacare to force private health insurance companies to pay for abortion and abortion causing drugs and devices from the premiums they collect?

These are all good questions but why can’t any of them be resolved in America’s current moral climate? Perhaps it is because each question is answered based on a moral framework. In America today there are two opposing moral mill stones grinding against each other, the traditional Judeo-Christian ethic vs the secular materialism. Determining 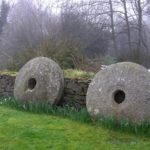 what is morally correct requires a person to submit to a belief about the purpose of man. A community or nation is defined by a people who not only share a common geography and language but values too. Those values are determined by what they believe about the purpose of humanity. Each view believes something very different about the value and purpose of a human.

America, as a nation, is cut in two because it has two opposing belief systems at work. If one believes mankind is created in the image and likeness of God then all human life, without partiality, is to be treated with the utmost dignity and care and abortion is wrong. All other social norms, mores, and laws will then reflect that broad definition of man through family, education, medicine, business, government and law. If, on the other hand, one believes humanity is purely material with no real purpose other than what the individual assigns to himself, then dignity is nothing more than a word used by the powerful as propaganda to manipulate the public into enslaving policies to serve the wishes of the powerful taskmaster. We see the logical outcome of this in history with scores of secular materialist regimes of 20th century. Both moral beliefs answer the question, what is man? but in a drastically different way with dramatically divergent results.

Secular society says human purpose is determined by the individual person who assigns value to himself. When the various individual’s values compete the government vests itself with the power to arbitrate whose value is more valuable. Ironically, this is how the secular value of individual autonomy mutates into tyranny. The secular view can have no real, lasting, or objective ethic of how people ought to treat one another because it depends that which is constantly changing…the passions and appetites of the population ultimately arbitrated by the personal opinions of nine individuals on the Supreme Court. Conversely, the Christian says human value is fixed by God. Ironically, the Christian view has a liberal vision of the value of all humans at any stage of maturity because of the unchanging nature of Who God is. Therefore Christians actually have an objective standard by which to measure the merits of human behavior. It is wrong always and everywhere to intentionally kill a vulnerable human being at any stage of maturity from the womb to the tomb because each person is so by an act of God and reflects the image of God. Therefore it is imperative that a person or community never willingly dehumanize or harm anyone for our own personal benefit but rather be given the deep respect and consideration due such a one as has been made just a little lower than God Himself. Which kind of society is more humane, secular or Christian? Which kind of hospital is more likely to fight for your life, secular or Christian? Which kind of school is more likely to convey dignity and self-worth to your children, secular or Christian? Which kind of husband is more likely to treat your daughter with love? Which kind of wife is more likely to treat your son with respect?

Beliefs drive behavior. And what we believe as a society eventually permeates everything including policy, medicine, education, media, and the market place.