New York remains the abortion capital of the U.S. with more abortions occurring on a per capita basis than any other state. Abortion is trending down for the seventh consecutive year. The 2015 data reveal that the number of abortions statewide hit another all-time low since abortion was legalized in 1970 (NY legalized abortion before Roe v. Wade). In the last seven years measured (2008 to 2015) the number of abortions dropped 25% including a 5.2 point drop in 2015. Monroe County, home to Rochester, continues to lead the way in this abortion trend reversal with a 12% reduction in 2015 alone. Monroe County is one of the only counties with a consecutive seven year reduction; abortion falling by 49%!

These statistics are the most up to date and accurate in the nation. Since abortion rates fell again in NY, the abortion bell weather state, it is likely that they are falling everywhere else too. 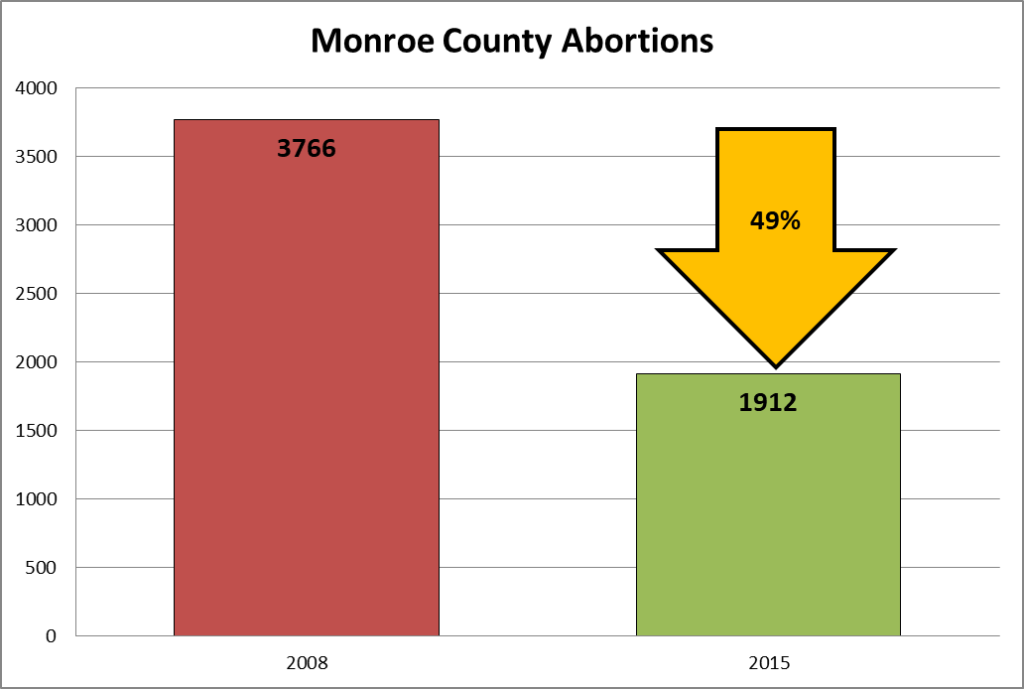 National abortion advocates argue that declines in abortion happen for two reasons: 1) Increased access to contraception and 2) Decreased access to abortion. Yet, these reasons do not account for the phenomena in NY. Not only is NY one of the most legislatively permissive states in the union, apparently contraceptive use has played no measurable role either. If abortion rates were declining because women were using contraception more effectively, then the number of NY pregnancies would be declining just as fast as abortion. But pregnancy rates have slowed by only 0.64%, while abortions fell a full 5% statewide in 2015. Translation: Women are still getting pregnant at nearly the same rate but are simply not choosing abortion nearly as often.

One of the contributing factors in Monroe County’s sharp decline is the black community’s abortion rate. While the black community is a minority they have been the abortionist’s primary customer. So in 2008, 38% of all black pregnancies ended in abortion. But by 2015 the rate shrank to 25%. While all ethnicities declined in their use of abortion, the black community was responsible for the majority of the reduction. This trend is exceptional as the number of pregnancies ending in abortion among blacks in New York State hovers at around 47%. So what’s happening in Rochester?

When asked about this Jim Harden, President of CompassCare Pregnancy Services said, “Women have abortions because they feel trapped. Pregnancy care organizations like CompassCare give women back their true autonomy with ethical medical care and comprehensive community support. This support empowers them to make the most difficult choice and have their baby. These numbers say that the community cares and is rallying to support women rather than abandon or abuse them in their hour of need.”

This is ‘Real Abortion News’ sponsored by CompassCare Pregnancy Services.