Abortion Down 58% in Monroe County! 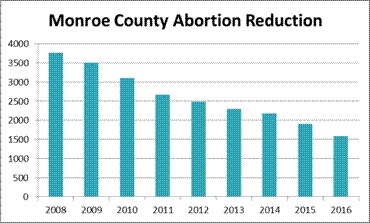 According to the recently released NY State Vital Statistics, this is the single largest drop in the history of Monroe County. Not only is abortion at an all-time low for Monroe County since New York legalized the practice in 1970, it is down 58% in just eight short years (See graph to the right).

The abortion industry would have us believe the reduction is due to decreased pregnancies because of better sex education and greater access to birth control. However the pesky facts show pregnancies remaining relatively flat (See chart below). Simply put, pregnant women are choosing to have their babies more often. 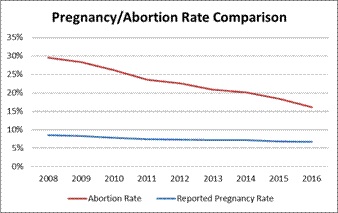 What role has CompassCare played in this amazing abortion trend reversal? For the most recent year measured in New York’s vital statistics, it appears that CompassCare is responsible for 57% of the total reduction!

This level of effectiveness would not be possible without you. It is an honor serving alongside you as we continue by God’s grace to erase the need for abortion one woman, one baby at a time.