Starting in 1979, pharmaceutical companies began producing vaccines using fetal cell lines from aborted babies, instead of nonhuman cell lines. Research is just now being done on the safety and efficacy of the manufacturing formula. Over the following 20 years, fetal cell line vaccines were phased in for all mandatory childhood 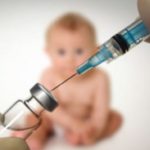 But there are moral implications to consider as well for those who believe abortion is the wrongful ending of innocent human life. Namely, profiting from the death of the preborn for one’s own benefit violates their conscience and causes them to participate in the dehumanization of mankind.

Should there be moral alternatives for parents who value the idea of inoculation but whose conscience will not permit them to ‘benefit’ from abortion?