A woman facing unplanned pregnancy is a Christmas metaphor. Not Mary’s unexpected pregnancy with Jesus but Israel’s need for a savior. 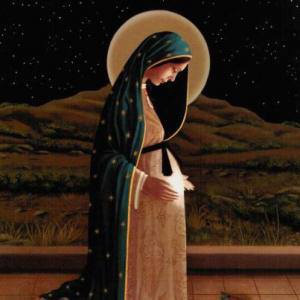 Israel is a woman facing unplanned pregnancy; stuck, lost, mired in a series of faithless decisions resulting in the loss of physical and moral freedom. She like Israel is unable to resolve the crisis without powerful intervention from the outside. A woman considering abortion is shipwrecked on the same reef of despair as you and I were, and as the nation of Israel was before Christ’s birth.

The stormy elements of unplanned pregnancy drive a woman to think abortion is her only lifeboat, not because she feels empowered by “choice” but because her circumstances bully her into it. When a woman facing an unplanned pregnancy comes to CompassCare she says in so many words that she is trapped and that abortion is her only option. She often is in anguish and feels powerless having lost what she desired for her life. Much like ‘Rachel weeping for her children’ (Jeremiah 31:15; Matthew 2:18), the only way to dry her tears is to realize the hope that has been made apparent through Christ’s birth. Israel was stripped of her inheritance under God’s judgment and deported to Babylon for her sin, and yet, God had a plan to deliver her through the incarnation of His Son, called Immanuel, which translated means “God with us” (Matthew 1:23). The arrival of Jesus signaled the final end to the cause of their weeping which the LORD through Jeremiah commanded saying, “Restrain your voice from weeping and your eyes from tears” (Jeremiah 31:16) for “He will save His people from their sins” (Matthew 1:21).

But how will this salvation happen? The Savior’s work would fulfill the covenant of law under Moses when God freed the people from their bonds in Egypt (Matthew 2:15; Jeremiah 31:32). After all Jesus says in Matthew 5:17, “Do not think I came to abolish the Law or the Prophets; I did not come to abolish but to fulfill.” Jeremiah says, “’Behold, days are coming,’ declares the LORD, ‘when I will make a new covenant with the house of Israel and with the house of Judah…for they will all know Me, from the least of them to the greatest of them,’ declares the LORD, ‘for I will forgive their iniquity, and their sin I will remember no more’” (Jeremiah 31:31, 34). This is God’s plan of

redemption. This is the glorious reality of His grace, worked out among sinners. The nativity is the dawning of the long awaited morning star of restoration rising over Israel’s perpetual night as God “became flesh and dwelt among us” (John 1:14) and was revealed to all; the small (lowly shepherds, Luke 2:8ff) and the great (King Herod, Matthew 2:3). And His work on the cross, the very purpose for His coming, the new covenant in Christ’s blood, has the power to free us from our bondage under sin when we submit to Him, rather than continue to be ruled by our passions. God has given CompassCare the ability to offer these women that same assurance of peace through salvation that comes only from Jesus.

Make no mistake; a woman facing unplanned pregnancy is not considering abortion simply because of financial pressure, apathetic fathers, or educational inequality but because of the darkness of a world ruled by the great yet merciless Herodian-like grip of sin. The trespass of abortion today is not an escape hatch from the consequence of yesterday’s sin. There is only one way of escape. Because Jesus

came and bore the burden of our sin on the cross, we are now free in the power of the Holy Spirit to “Bear one another’s burdens, and thereby fulfill the law of Christ” (Galatians 6:2). CompassCare serves women seriously considering abortion by offering the treasure of truth about who they are as humans made in the image of God and their need for restoration with Him. In the process, CompassCare dignifies her by truly caring enough to empower her with the ethical medical care and community support she needs to have her baby. Now with Jeremiah we can say to her and to each other, “‘There is hope for your future,’ declares the LORD, ‘And your children will return to their own territory’” (Jeremiah 31:17). Our territory as humans is walking with God. “What then shall we say to these things? If God is for us, who can be against us?” (Romans 8:31).